Having worked with kids in so many forms over the years, I am lucky enough to own a parachute

.  I personally believe that every ECE educator or parent involved with a mom's group should own their own as well.  They are versatile and wondrous for children.  They make a great picnic area, perfect for "forts," and turn a regular play-date at the park into a special occasion. 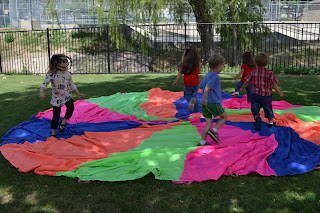 As soon as I set the parachute out, the kids began exploring it.  First they ran around in a circle. 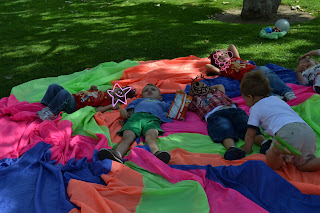 Next they laid down and watched the clouds.  Michael said, "I see a spinosaurus!" 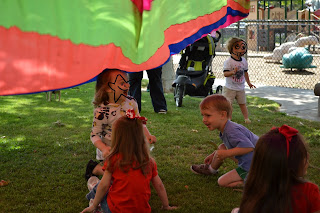 Once a parachute is picked-up, kids find it difficult NOT to run under it! 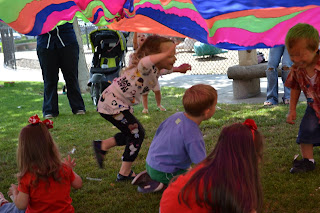 Once they get it out of their system, we play different games.  Since the ages varied at this mom's group outing we started by calling kids names to run underneath.  If the kids are a tad older, you can call by color, or name two children to switch places. 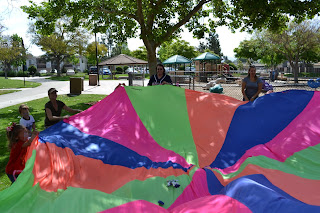 Then we played a game to send Buzz (he's a beanie baby type of toy) to the moon.  We had some mini bean bags too.  We practiced shaking the parachute soft and hard, little and big. 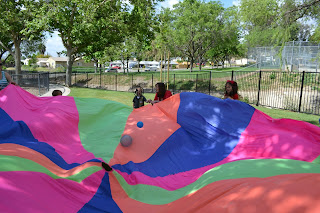 Then we played a game of "popcorn" with two balls.  We tried pulling the parachute tight to see if we could pop the balls into the air.  This is hard to do with little ones, but they didn't mind. 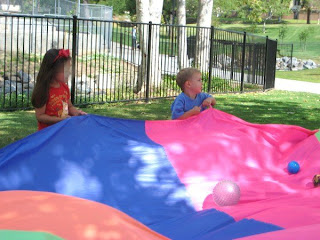 Mostly, they had fun bouncing the balls and chasing after them when they fell off the parachute. 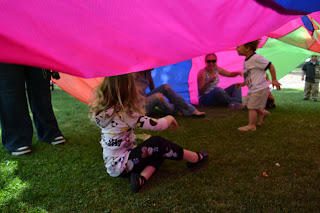 Then we caught some air and made a "tent" for all of us! 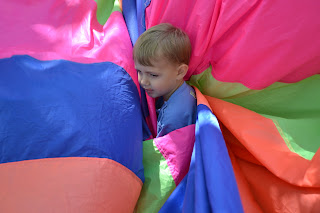 Then we wrapped some "presents".  A child sits in the middle, cross-legged, while the rest of the group walk around in a circle, holding the parachute up a bit, wrapping the child up in the folds. 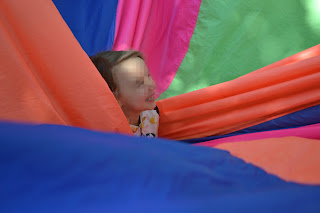 The kids loved being "presents!" 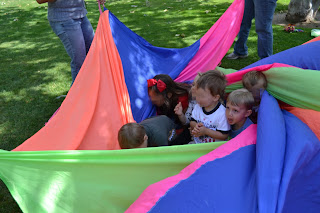 Then we tried it with the whole group... 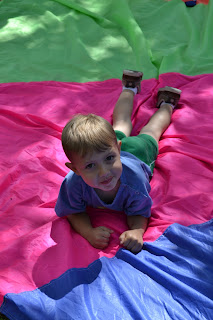 Once organized games were over, the kids returned to experimenting.  They liked pretending to fall... 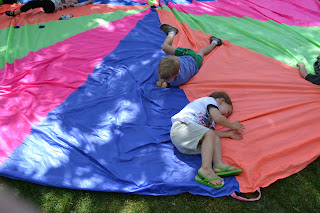 
What object do you pull out to make a regular day something special?

I'm Linked-up with The Amazing Mess!

NurtureStore: Carnival of Get Active! Play
By Messy Kids at May 03, 2011