My daughter loves fairies.  I love fairies.  And every year we attend a Fairy Festival at a local garden.  It's free, it's beautiful, and it's outdoors! 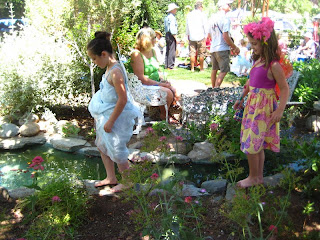 Ariel also has a small fairy garden she tends; adding and taking away gifts and toys for her fairies and trimming the succulents which make-up her garden.  Recently though, my backyard had become a jungle.  My kids were outside playing with a garden sensory tub I'd put together filled with green and yellow split peas, dry kidney beans, small flowerpots, faux flowers, bugs, and snakes.  It became quiet, so of course that was my cue to check-up on them.  I discovered some delightful imaginary fairy play....
The first thing I noticed were all the missing sensory items... 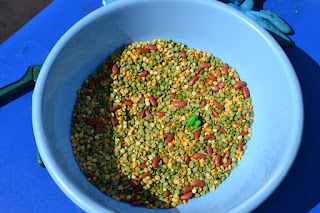 The kids, still in their jammies, had found a tuff of grass to create their fairy world.  Michael was sprinkling peas around the grassy forest while Ariel was lost in creative thought. 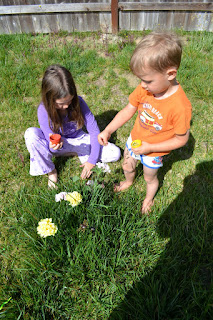 First she arranged some of the fake flowers to her liking. 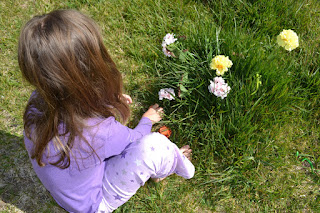 Uggghhhh!  Snakes and lizards in the grass! 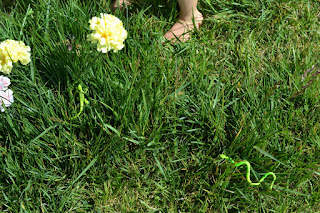 Then the bugs and flowerpots were arranged.  Doesn't that spider look real? 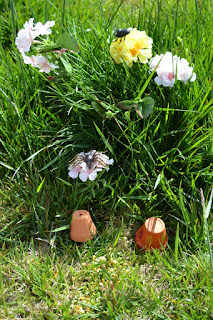 Close-up of our lizard friend. 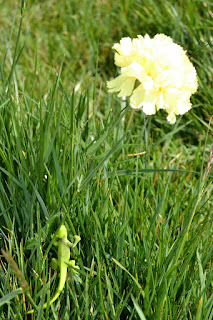 If you look closely, you can see that my daughter even created a path from some of the peas and beans. 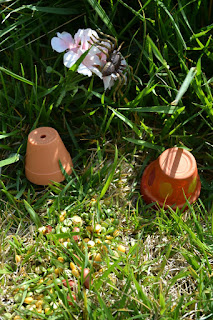 And of course, our fairy... 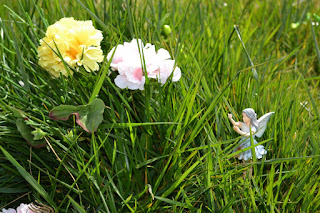 This fairy reminds me of Miss Muffet 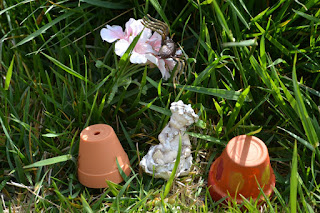 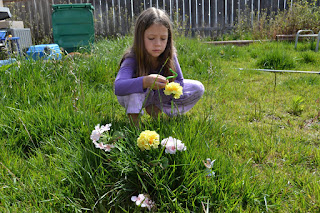 I left the play area alone for a few days, but eventually I had to mow the lawn.  I was disappointed as I loved looking at it whenever I went outside.  My son moved a few things around, as he does with Ariel's regular fairy garden, so it was changed slightly every time I took a look.  Even though we had to remove it, I know it gives the kids a chance to create something new next time.
A fairy garden is a magical creation and can contain whatever elements you and your child chooses.  It can be a play garden that constantly changes or a flower garden with added imagination and flair.  Get creative and try using items you already have: old barbie toys, a flower pot for the fairies house, sticks, etc.  For some great ideas check out these sites: