It's Playtime: Falling for Fall

Fall is my favorite season.  I love the colors on the trees, Halloween, and fall foods like pumpkin pie.  So this week on It's Playtime I'm paying homage to my favorite time of year by choosing activities I found creative, inspiring, and wonderfully FALL. 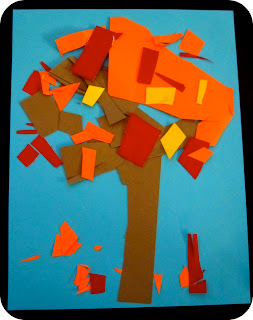 Cutting can be a difficult skill for preschoolers to master, but is essential in fine motor development.  This great Fall Foliage activity from Toddler Approved combines cutting practice and process art for a colorful and fun masterpiece. 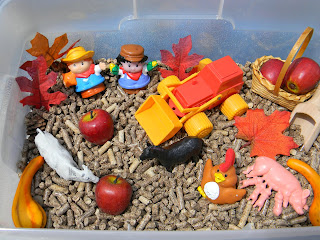 I simply love sensory bins!  They are as unique and individual as the moms and teachers creating them.  This cute Down on the Farm Sensory Bin from Jada Roo Can Do combines wood pellets, farm toys, and fall themed items for scooping and sensory fun. 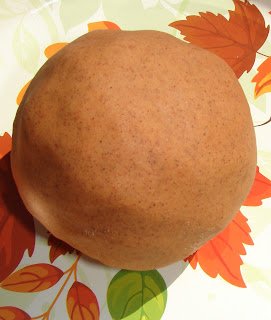 Next to apples, my other favorite fall food is pumpkin.  I adore pumpkin pie, pumpkin muffins, pumpkin cookies, and now, thanks to Dinosaurs and Octopuses, Pumpkin Pie Playdough.  Sure you may not want to eat it, but smelling it is enough for me! If you have a toddler, fall is a wonderful season for exploring outdoors and trying new things.  Daisy Chains posted some wonderful Autumn Art and activities toddlers will love (tested and approved by her daughter).
If you were featured this week, don't forget to grab your special "featured button."

* Be sure to visit some of the links that catch your eye. Commenting on posts that you find interesting or inspiring is a wonderful way to develop your own playful community.
By Messy Kids at September 28, 2011 3 comments: Links to this post

It's Playtime: Apples Are in Season

Currently, I am homeschooling my preschool-aged son.  Our first theme unit is apples (oh how I love them so!), so this week on It's Playtime, I'm featuring some of my favorite apple themed projects to get us all in the mood for this yummy and versatile fall treat.

Apple-Stamping is a preschool favorite, but I love the addition of real leaves that the kids at happy hooligans added to their artwork. 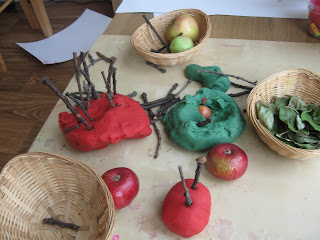 Over at Pre-school Play, they created Apple Themed Playdough.  Besides the red and green dough, they added natural play elements such as twigs, leaves, and little apples.  A great sensory play experience for little ones. 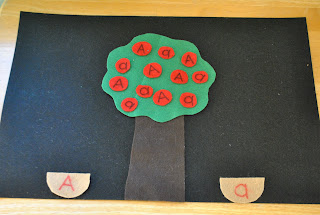 I love this Apple Tree Felt Game created by the Iowa Farmer!  A fun way for little ones to recognize big 'A' and little 'a'.  Easy, play-based fun. 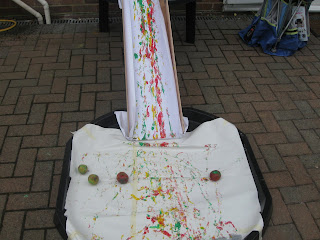 I don't usually feature the same blog twice but I just loved this Apple Rolling project from Pre-school Play!  If you don't have a slide, that's OK, simply allow your child(ren) to roll the apples around on some paper or in a box (similar to marble painting).  I have to say this project makes me want to buy a little plastic slide simply for painting purposes!

If you were featured this week, don't forget to grab your special "featured button."

* Be sure to visit some of the links that catch your eye. Commenting on posts that you find interesting or inspiring is a wonderful way to develop your own playful community. 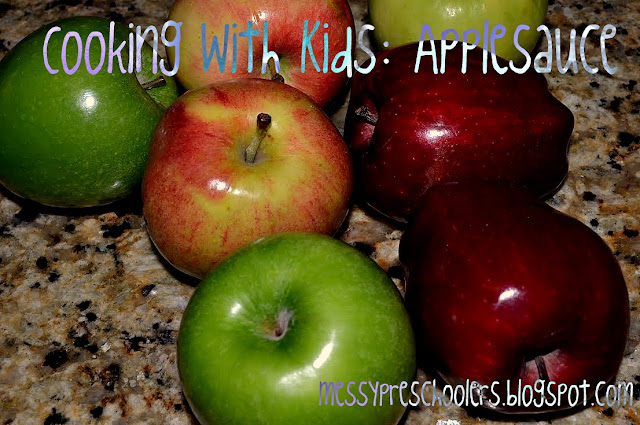 School is back in session and everybody is dusting off their apple themes for fall.  This year, I'm homeschooling my son so, I too, have had to brush off my teacher hat and figure out what the heck I'm going to do.  My son is not one for art, but he loves cooking, so I've made it a point to include several apple recipes in our homeschooling schedule.  Last week we started off easy and made one of my son's favorite foods...applesauce.

We used an extremely simple Applesauce recipe from Allrecipes.com.  I love this website because you can change the serving size and with a click of a button, the recipe will recalculate your measurements.  I chose 1 serving for this project.  We had several apples to choose from; Michael chose a green one.

We began by cutting our apple.  We used the apple slicer together, then I gave Michael a safety knife (otherwise known as a pumpkin carving knife) so he could try to cut the apples into chunks on his own.  Apple peel has a lot of nutrition, so I left it on.

Then we placed the apples into a pot and added the sugar and cinnamon. 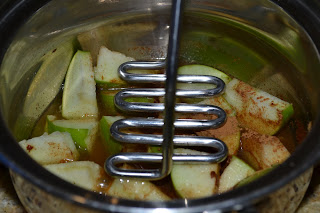 Michael loves Sid the Science Kid.  There is an episode about heat and change where Sid's preschool class makes applesauce.  Michael remembered the kids trying to mash the apples before they are cooked and wanted to try it too.  He discovered they were too hard to mash.  We talked about how heat will change the apples, making them softer, and we'd try again after the apples had cooked.  Then I added a bit of water to the apples and turned the heat on. 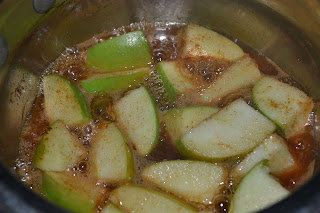 Michael was excited when the liquid started boiling.

Once the apples were nice and soft, Michael mashed them. 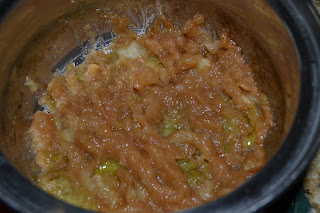 I learned that when you choose to hand mash apples, it is a good idea to remove the skin.  Had I thrown the apples into a blender instead, leaving the peels on would have been OK.

Yum, yum, time to eat!  Michael enjoys his tasty creation (except the peel).

It's Playtime: Make Your Own Fun

It's DIY time again at It's Playtime proving that making your own fun can be just as good, if not better, then the real thing!

Kinder Days created this cute Play Treehouse from an old plant stand and some natural wood elements.  The perfect home for little critters, fairies, or gnomes! 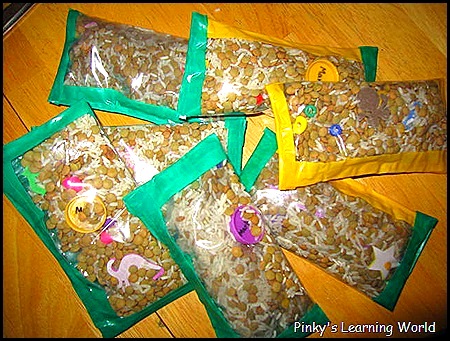 How about these great DIY Bean Bags from My Little Princess World?  No sewing involved!  Plus the beans and rice inside are reused from an old sensory project.  Add some foam stickers and buttons and these bean bags double as sensory bags! 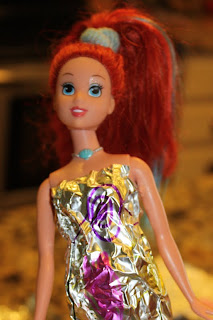 Are your daughter's dolls looking for some new, high fashion clothing?  Check out the latest Foil Fashion trend from Let Kids Create.  Bring out your child's inner fashion designer and allow her to decorate the foil herself.  And don't worry, her doll won't need a bigger closet; this clothing folds and fits nicely inside a recycled egg carton.
Have a great DIY idea?  Don't forget to link it up!
If you were featured this week, don't forget to grab your special "featured button."

By Messy Kids at September 14, 2011 No comments: Links to this post

Art in the Rain 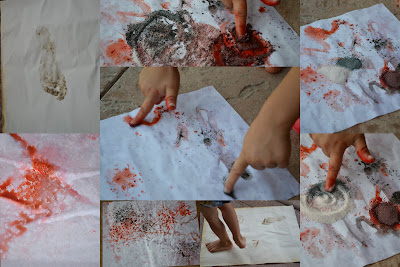 On Labor Day, San Diego was given a special treat.  A rare, summer storm passed through our city bringing us thunder and rain.  Growing up, my parents and I spent many summer vacations in southern Texas where summer storms were common.  My great aunt and uncle have a house on the Guadeloupe River and my cousins and I would stare out the window over the river and watch the lighting.  When the lighting ceased, we would play in the warm rain, smelling the earthy smell that only rain can bring.  Here in San Diego, summer storms pass quickly bringing a couple rumbles of thunder, simply to announce it's arrival, and about 10 minuets of rain.  Our storm this past week lasted a little longer, mostly clouds and humidity, but a little rain on and off for about 24 hours.

The moment it started to rain, I checked for lighting, then grabbed my son and told him we were going to play outside; I knew we didn't have long.  Then the idea hit.  We would create art with the rain!  I'd seen rain painting on another blog months ago (I'm sorry, I don't remember whose it was) and had been waiting to try it.  I grabbed some white paper, dry Kool-Aid, and a popsicle holder, and ran outside to play.

We used the popsicle holder to house the various colors of Kool-Aid.  My son was able to grab pinches of the powder and sprinkle it onto his paper.

Then he set the paper out in the rain.  The rain drops wet the powder creating a vibrant splatter pattern.

Michel made a 2nd picture, this time he tried dumping the powder.  He was surprisingly careful.

For the 3rd picture, we wet the paper first, then Michael finger painted with the Kool-Aid.

He dumped the remainder of the powder onto the paper which created little mounds for him to spread around. 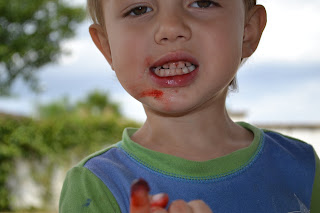 Of course he had to eat some of it!

Michael became bored of painting and found some mud to enjoy.  So we turned that into art too! 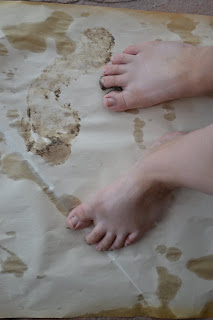 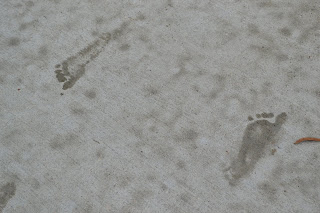 We made prints on the driveway as well.

As quickly as it appeared, the rain was gone.  But, we enjoyed a good 20 minuets outside together in the fresh, clean air.  Playing in the rain is good for the soul.