From Art to Science: Solids and Liquids 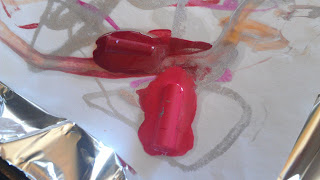 I wanted to paint the other day, but my son had other ideas.  He asked to melt crayons again.  Thrilled he was interested in creating anything, I plugged in my griddle and prepared to grant my son some melty fun. 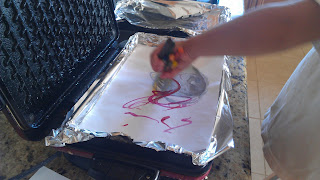 He started by drawing, first a single crayon, then a handful of crayons.

Then he decided to experiment.  He wanted to find out what would happen if he placed crayon pieces onto the griddle.  He was excited to see them melt into puddles.  Suddenly this art project turned into a lesson in solids, liquids, and heat.  When we made applesauce, we discussed heat and it's power to change things.  But apples don't puddle, only soften, so we decided to experiment with other items and discover what would turn into a liquid and what would remain solid.

We started with butter, then added a chocolate chip. 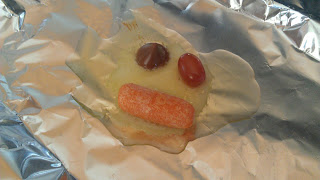 But I also wanted him to see that not everything will melt, so upon my suggestion, we added a carrot and a grape. 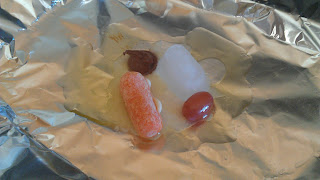 After a few minuets, Michael noticed the carrot and the grape weren't doing anything exciting, and the butter was melted, so we added an ice cube too.

He watched intently as the ice melted, the butter spread, the chocolate began blending into the mix, and the carrot and grape remained the same.  I asked him to show me which items were liquid and which were solid.  Then as suddenly as the lesson had begun, it ended (4 year old attention span).  We'd enjoyed some impromptu science... 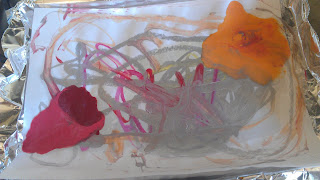 while making a pretty cool piece of art!

by Ezra Jack Keats, we discussed the snowball Peter places into his pocket.  I asked Michael what would happen to the snowball in the house.  He said, "it will melt".  When asked why, "because it's warm in the house".  By George, I think he's got it!